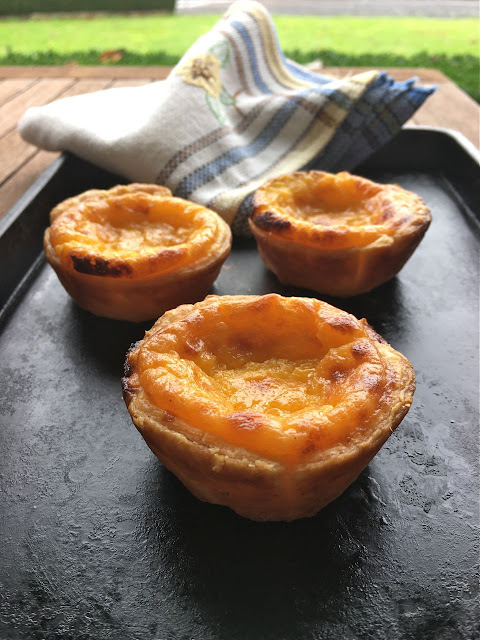 Portugese tarts are creamy, baked custard tarts in a crisp pastry shell.  They're super easy and are just so delicious that you will want to make more. I know this as I only made a few (which was probably just as well) but made me feel sad on the day.  I made them several weeks ago and, as usual, had not got around to posting them on the blog until now. I’ve been distracted by having a little fling with Instagram. It’s very tempting to just snap a photo, post it with very few words and hey presto there’s your story. No writer’s block involved nor, for that matter, much styling. But it is nice to come back to the blog now and again.

If you’re a perfectionist, you’ll want to know in advance that the custardy filling does sag a little after baking. But hey the taste is the thing here so let's just let that one go, okay?

Before starting, bear in mind there's an hour's chilling time once you've placed the pastry circles in the tin.

Add a sprinkle of cinnamon if you want, it’s in most recipes, but I left it out as I’d just made a chocolate cake which contained cinnamon and the taste came through quite strongly.  As noted in the recipe below, I had no single cream so used double cream - double yummy I think! Well worth doing again ... and again.


Remove pastry from freezer to defrost.

Lightly spray 9 holes of a 12-hole tart tin with oil or grease lightly with butter.

Using a 9cm diameter cookie cutter (or top of a glass or a lid) cut 9 circles out of the pastry and press gently into the holes to fit. Place in the fridge to chill for an hour.

Meanwhile, make the custard by placing the egg, two egg yolks, caster sugar and cornflour in a medium saucepan (don't turn heat on yet) and stir to combine. Add the milk and cream and stir again. Add orange or mandarin peel and whole vanilla bean and heat gently, stirring constantly until the mixture thickens and just comes to the boil.

Remove from heat, discard peel and vanilla bean (this can be rinsed, dried and used again). Transfer custard to a pouring jug and cover the top of the custard with plastic wrap to stop it from forming a skin. Leave to cool completely.

Heat oven to 220°C. Divide mixture evenly between the pastry cases and bake 20-25 minutes until pastry and custard are just starting to colour.

Remove from the oven, leave in tin for 5 minutes then transfer to a wire rack to cool completely.