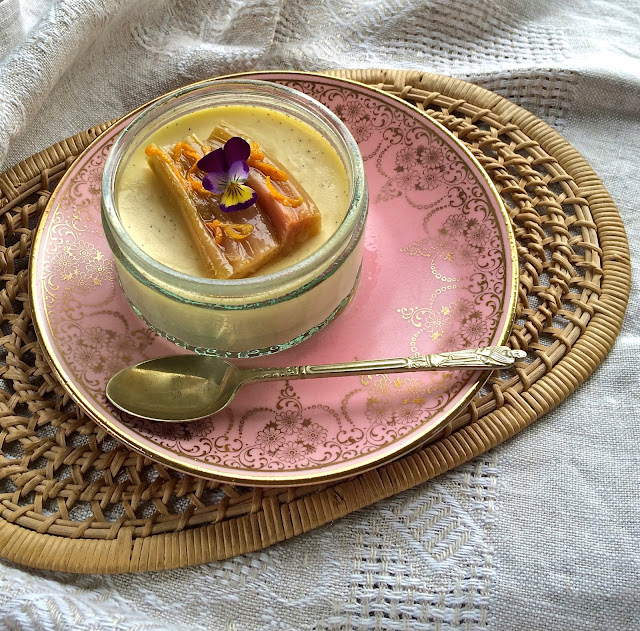 I'm not ashamed to admit I am hooked on Masterchef Australia's current season showing here in New Zealand. It does appear to be a bit "kinder" than most of these types of shows. Granted it's still a competition, but the focus is less on "who did/said what to who" and more on the food.

Well there's been a few panna cottas whipped up in the Masterchef  kitchen which has got me in the mood to revisit, even though I've made a similar one a few years back. It's such a simple, prepare-ahead dessert perfect for a balmy, summer evening  - something else which we've been having a few of recently.

This latest is topped with some exquisitely fragrant orange blossom rhubarb (recipe from Sweet Treats from Little & Friday cookbook). I cut back heavily on the sugar stated in the book (1 to 2 cups - either that's a typo or someone has a very sweet tooth!) as a 1/2 cup was plenty.

Bake the rhubarb in advance and leave it to cool in the fridge. It will keep for a few days in a sealed container in the fridge and you can use the rest in your breakfast cereal.

A small biscuit such as shortbread (whole or crumbed) or tuile is a nice touch and adds some extra texture.

For a superior vanilla flavour, I urge you to use either the seeds scraped from a vanilla pod or vanilla extract or even vanilla essence in preference to imitation vanilla which has an artificial flavour and will really do nothing for the taste.

I like that you can see the vanilla seeds in the final result but if you don't want the seeds showing in your panna cotta, strain the final mix through a very fine sieve or muslin cloth.

Lastly, I admit to being a bit of a coward. I didn't go the whole Masterchef way and upend the panna cotta onto a plate from a mould fearing a disaster! One day I must give it a try...


For the Baked Orange Blossom Rhubarb

*I had more stalks but there was a mix of thick and thin so I cut the thick stalks horizontally to ensure they were all of a similar thickness to cook evenly.

Cut rhubarb into 4cm-5cm slices and place in a large bowl. Add the orange juice and zest, sugar and orange blossom water and toss to coat evenly.  Transfer to a baking tray and cook in oven for approximately 20 minutes or until rhubarb is tender.

Cool and store in the fridge in a sealed container.

Have 6-8 ramekins or glasses ready.

Whisk the gelatine powder into the cold water until it is fully mixed and set aside while you make panna cotta.

In a heavy based saucepan, slowly bring the cream, milk, vanilla and sugar to the boil and just as it bubbles, remove from heat.

Give the gelatine mix a final whisk, then whisk it into the panna cotta mix in the saucepan until it has all dissolved.  Leave to cool slightly.

Pour the mixture evenly amongst the ramekins or glasses.  Transfer to the fridge to chill until set.

To serve: Top panna cottas with about 3 pieces of baked rhubarb (choose the pink ones!) or other fruit of your choice and shortbread or tuiles if desired.

Panna cottas will keep in the fridge for about 2 days.