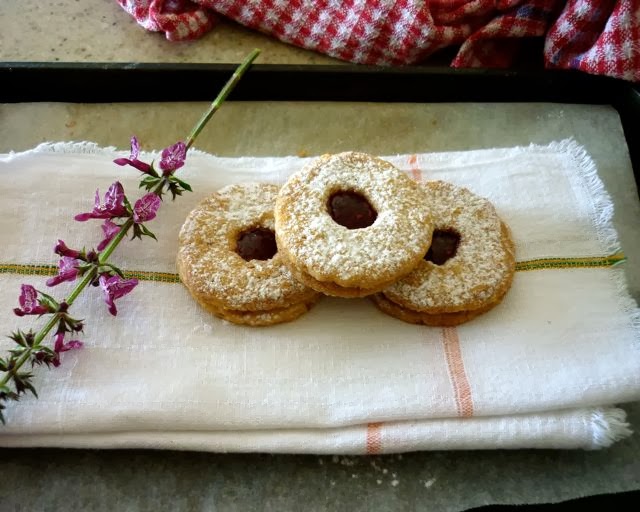 Back to baking again and this time something a little different.  These are the first biscuits I've made using a walnut dough.

You may have heard of Linzer Torte?  Considered to be the oldest cake in the world, the Linzer Torte was named after the city of Linz in Austria.  It's a pastry made with ground nuts and filled with blackcurrant preserve.  These are the biscuit version of the Linzer Torte.  So instead of a pastry base, you cut out biscuit shapes, bake them and sandwich them with a preserve.  I wonder what's Austrian for hey presto?

I really liked the taste and texture of the biscuits - both crisp and crumbly and just enough of a nutty taste without overpowering. 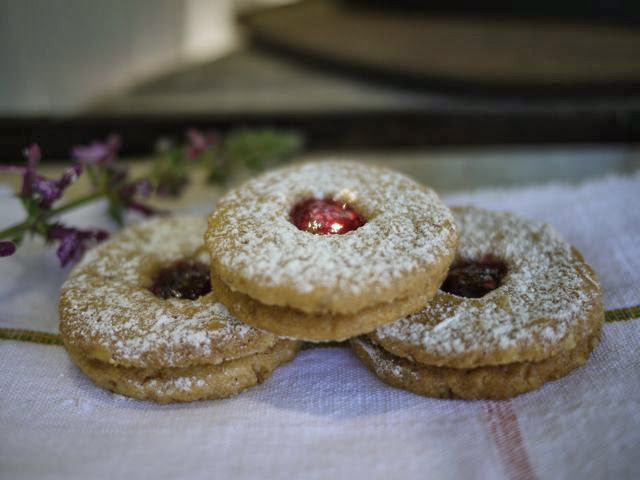 They were easy and quick to make and the dough rolled out nicely but if it gets too warm to handle, pop it back in the fridge for a few minutes.

Next time I'd make them a little thicker and perhaps use next cookie cutter size up for a more substantial biscuit.

As I've noted in the recipe below, I didn't have a small enough cutter for the inner circle so I used an apple corer (!) - which is why the circles are a bit unshapely.

The recipe here uses walnuts, but you can substitute almonds or hazelnuts.  Not having blackcurrant preserve, I used raspberry.

I'm sharing these with the lovely Mairi at Toast who is hosting this month's Sweet New Zealand.

Combine the flour, sugar, walnuts and hard-boiled egg in a bowl.  Add butter and rub in with your fingertips until combined.

Stir in the egg yolk until the dough comes together.  Turn onto a lightly floured surface and knead gently until smooth.

Cut dough in half and roll each portion between sheets of baking paper to 3mm (1/8 inch) thick.  Refrigerate for 30 minutes (leave the baking paper between the sheets).

Bake in the oven for 15 minutes and cool on the trays.

Sandwich the biscuits with jam and dust the tops with icing sugar.

The biscuits (without the jam) can be be kept in an airtight container for about a week.