Etcetera ... Afternoon Tea in the Country 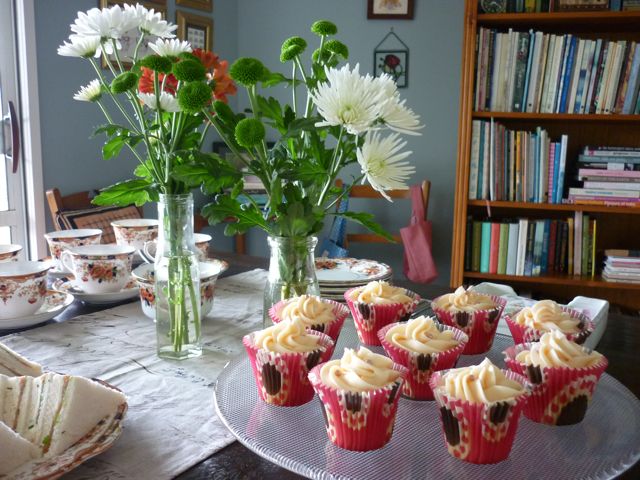 Excuse me while I just ease or squeeze myself into the comfy trackpants and settle on the couch for a rest. I've just had afternoon tea with some food bloggers here at my home and there was so much good food that I am fit to burst. I didn't quite manage to taste everything but I have a little stash to try at work tomorrow. Well, there's got to be some good bits about a Monday back at work, isn't there?

I've "known" (in the blogging sense) Arfi since I first starting reading food blogs a few years ago and I finally got to meet her today.  Arfi blogs at HomeMadeS and arrived not only with some unusual little treats but a box of her homegrown limes and cartons of eggs for the rest of us to make use of.  Thank you Arfi, it was a pleasure to have you here.

Arfi didn't have too far to come as she lives nearby.  The others, making the road trip from Auckland, were:

Alli of Pease Pudding and busy baker at her Pop Up Patisserie in Waimauku, as well as blogging and cookery classes when she has time!

Gillian from So So Simple.

Thanks for your lovely contributions and company.


The air was afresh with citrus notes. Mairi had delved into Ottolenghi's Jerusalem and baked a loaf bursting with flavours of orange marmalade and coconut.  In a similar, yet different, vein, Carmella produced a moist orange almond cake.  Alli had little iced lemon polenta cakes, luscious little lemon tarts and chocolate raspberry tarts. Gillian brought a crunchy chocolate slice and Arfi tempted us with some exotic looking delights. 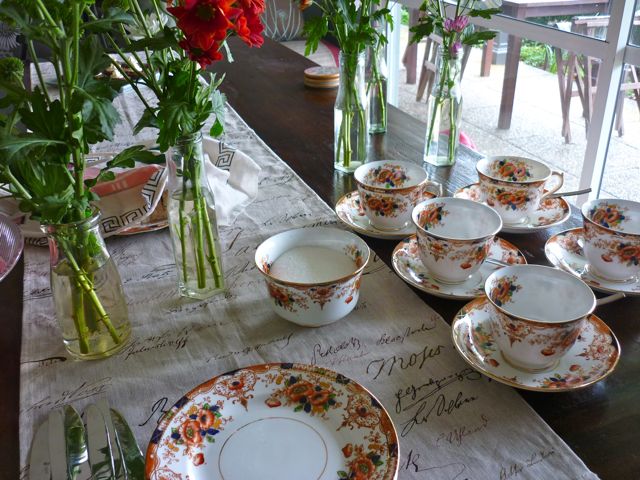 In a state of doubt as to whether anything I made would succeed, I attempted two recipes, the star of which were some mini chocolate banoffee tarts.  Next up on my list were vanilla cupcakes with an apricot cream cheese icing.  The swirls on the cupcakes were thanks to this tutorial on Lydia Bakes - by far the quickest, simplest, easiest and most successful icing tutorial I have ever watched.  I was pleased with the results. 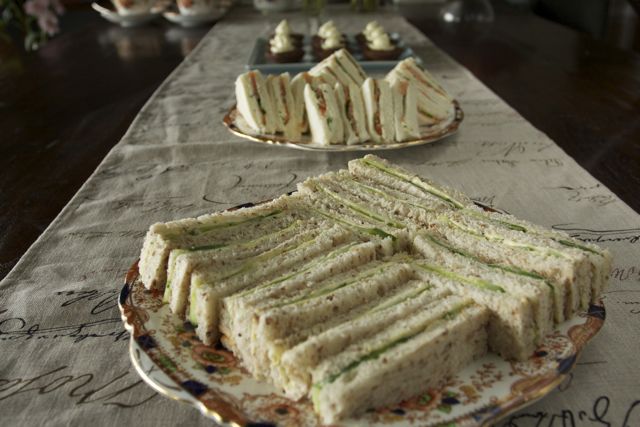 Alli was bemused with me for using recipes to make sandwiches but I swear these are the best cucumber sandwiches I have ever made and the salmon and herb cream cheese ones came a close second. 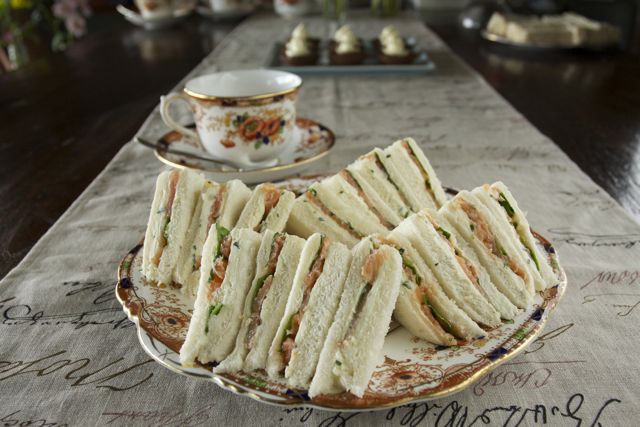 Most of us drank tea and I picked Twining's New Zealand Earl Grey which is a fragrant bergamot tea with orange blossom.  So refreshing, I managed four cups served in Bill's grandmother's tea set making its first official outing here. I think the plates matched the salmon very well.

Watch out for upcoming posts on those banoffee tarts and cupcakes (the sandwiches might get a look in too).