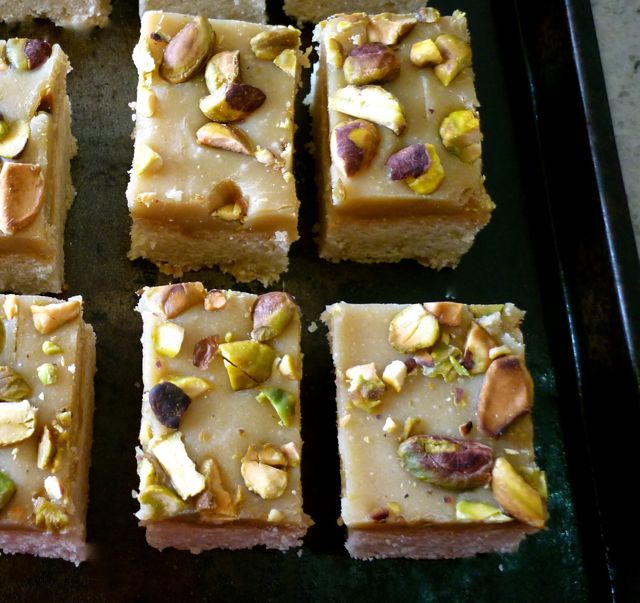 The kitchen hand is in danger of being fired for failing to follow instructions. He was given precise directions on size when he offered to cut this slice into pieces. I even showed him a photo from a recipe book of the desired shape and size (I’m not being anal, he’s very visual, you know).  Some time later, a baking tin arrived in front of me with a completely different take on what I’d imagined.  Hmmm.  Fortunately for him I was not in possession of a sharp knife.  His reasoning was that they'd been made (by me, I might add) for a group meeting of his camera club and the smaller size would go further and be easier to handle. And because this slice, irresistible as it is, is not for the faint-hearted and should be made for sharing, I’ll let him off – just this once. 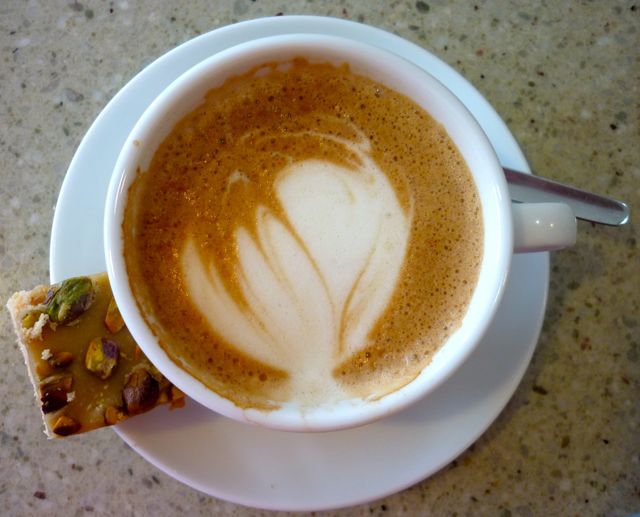 Preheat oven to 180C.
Put the flour, sugar, ground ginger and baking powder in a food processor and pulse to combine.  Add the chopped butter and process until mixture resembles fine breadcrumbs.
Press into a 20cm x 30cm tin lined with baking paper.  It will look quite crumbly at this stage but as the butter heats it comes together.
Bake for 35-40 minutes or until golden and firm to the touch.

While the slice is cooking, toast the pistachios in a dry pan over a medium heat for a few minutes, stirring frequently, until lightly browned.  Be careful not to let them burn.  Chop into smaller, but not too small, pieces and leave some whole.

Put the butter, golden syrup and ginger in a saucepan over medium heat and cook for 2-3 minutes or until the butter is melted.
Stir through the sifted icing sugar and pour immediately over the slice. Refrigerate for about half an hour, then sprinkle over the pistachio topping.  Place back in the fridge and leave for about an hour or until the icing is set.
Cut into squares or slices – whatever size you want, I won’t be watching.