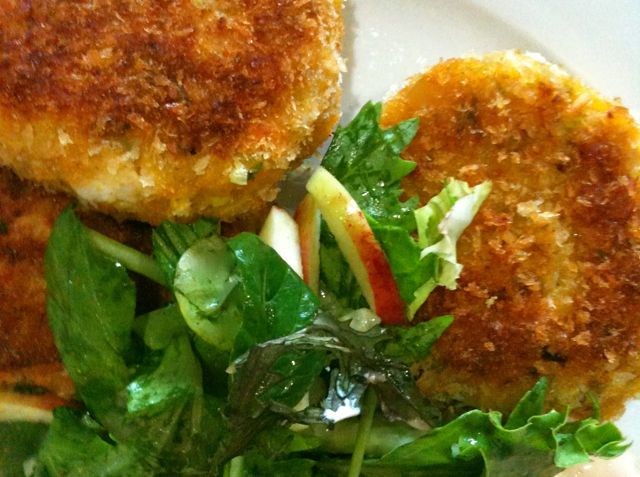 It’s not very useful when you are writing one post and another one barges ahead on its taste factor alone.  I wasn’t ready for the interruption but I was ready for the bite into a golden crispy coating and the herb and lemony fish mash inside.

I don’t think I’ve tasted fish cakes as good as these.  What’s more, it was pleasing for a Scot, keen on getting value by using every item purchased, that this recipe emerged from leftovers.  (Years ago, my partner picked a tiny portion of cooked chicken on a small saucer out of the fridge, about to have it in his sandwich.  I stopped him and said it was for dinner. He looked curiously at the mini ration and back at me, waiting for my own version of the loaves and fish miracle.  I made risotto.)

So, leftovers - cue one small snapper fillet, which we thought we’d manage to finish off the night before but caved in after consuming a sizeable serve each.

The rest of the ingredients were assembled from one lonely kumara, two freshly dug potatoes, the last of the spring onions (supermarket variety) and an opportunity to use the preserved lemons I’d made.

Luckily there were fresh herbs.  If not, I would not have even started.   Fritters and fish cakes really need herby extras.  Okay, that’s my opinion but it’s served me well, otherwise all you get is bland. Not good.

The sides - a crisp salad and spicy harissa cream - came by way of remnants too.

All that virtuous reward and a supreme taste.  Thanks to Den who caught the fish and made sure I got some.

Leaving the skins on, cut the potatoes and kumara into large chunks.  Place in a saucepan of lightly salted water.  Bring the water to the boil and cook kumara and potatoes until tender.  The kumara will cook before the potato so remove tender kumara with a slotted spoon as they are ready.   Leave cooked kumara and potatoes to cool in the bowl.

Once cool, use a knife to remove the skins from the kumara and potatoes and mash well.

Warm a heavy bottomed frypan and toast the Panko breadcrumbs until golden.  Keep moving them in the pan over a low heat and don’t let them burn.  Should only take a few minutes. Remove to a plate to cool.

With a fork, flake the cooked fish into the kumara and potatoes (I used my fingers as the fish had some bones and I could detect them before someone else did!).

Rinse the preserved lemon half under a cold tap, removing the flesh as you go, so you are left with just the yellow skin.

Pick the leaves from the fresh thyme, discarding the stalks.  You can leave the Italian parsley stalks intact as they are tender and slim so can be chopped with the herbs.

Slice the preserved lemon and the spring onions.  Add both to the herbs and using a knife or a mezza luna, chop them all together finely, then season with rock salt and ground pepper.  I added some lemon and dill flavoured salt. Add to the fish cake mix and combine all the ingredients evenly.

Shape the mix into balls (I used an ice cream scoop to make six even sized ones) and flatten slightly.  Dip each side into the beaten egg and then coat all over with the Panko breadcrumbs.

Heat some oil in a frying pan and cook over a medium heat for a few minutes each side until the fish cakes are golden crispy on the outside and heated through.  Remove to a paper towel then transfer to a heated serving dish.

Dish up the fish cakes with lemon wedges, a light salad (I used baby greens, matchstick apple and cucumber, and papery slices of red onion, dressed simply with local olive oil and lemon juice) and the spicy harissa cream.

The fish cakes would also be good with a chili sauce or chutney.

This was simply leftover sour cream (about a third - 50g - of a small tub), a ¼ tsp harissa paste (taste as you go, some are more spicy than others, I used my favourite, Malouf ‘s Spice Mezza) and a splash of lemon juice, whipped smoothly together with a teaspoon.