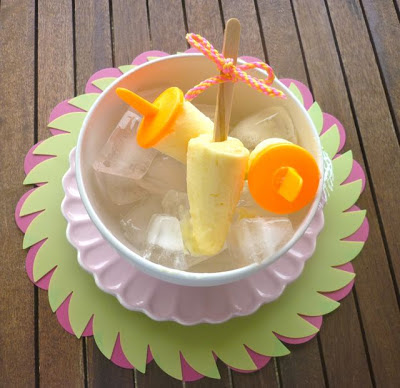 They say never work with children or animals.  Well, I’m adding ice cream sticks to that. While they might not cause as much destruction as tiny tots or pets, it's only a matter of time before it all turns to custard (literally).

So, with an eensy weensy frame of opportunity to photograph on a hot day, I quickly took 10 consecutive snaps before the ice blocks melted.  Setting up the styling in advance without the star attraction did help, but even so it sure didn't take too long for those little blocks to start disintegrating.

I then had a few messy minutes attempting to squeeze custardy melts into some resemblance of their original shape and back snugly in their moulds.  Don’t suppose there’s any takers for them now?

Although they were fiddly in a photographic sense, they are oh so  simple to make. Despite having cut out this recipe donkey’s years ago, I'd never really given much thought to making ice blocks but, after a few hot and humid days here, I thought I’d give them a go.

These are creamy and custardy with a hint of orange (I'd add more orange zest next time). Not quite as refreshing as a fruity ice block but nevertheless they'd be a cool alternative to dessert on a hot day or simply as a ‘rescue me’ package after a long, hot drive.

I was unable to source sophisticated, classy moulds for these so, apart from one grown-up wooden stick, children’s popsicle moulds it is!

In the end, I had more mix than I had ice block moulds, so I poured the remainder (after adding a shot of Malibu coconut liqueur to it!) in a small oval container (similar to a mini-loaf tin), lined with cling wrap and popped it in the freezer.   That may do as a dessert one evening.

In a food processor, mix all the ingredients until smooth. Pour into the moulds and tap gently on the work surface to release any air bubbles.  Insert the sticks and freeze until required.  Yes, it is that simple.

This is the difficult part.  To remove, dip the moulds briefly in hot water and gently ease the blocks out.

Serve individually as required, or arrange on a bowl of ice and decorate with some extra orange zest grated on top for a summer dessert.  Quick, before it melts!

I can’t think of a more summery, sweet New Zealand than this, so it’s my entry for this month’s Sweet New Zealand, hosted by someone who lives not too far from me but who I haven’t yet met, Arfi at HomeMadeS.
Posted by Lesley at 4:09 PM