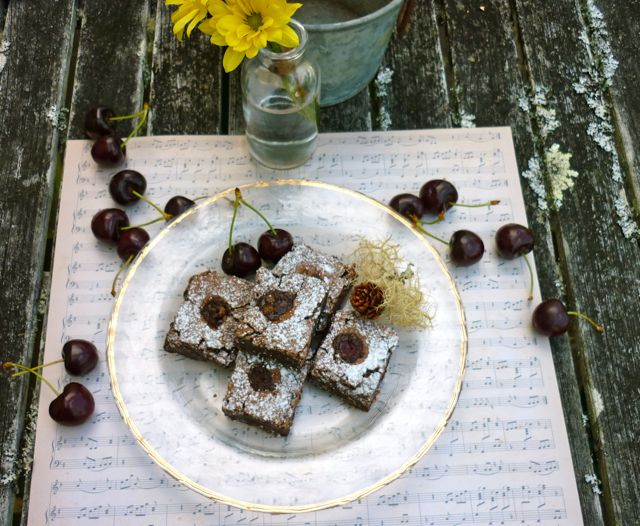 If there’s one thing to raise the hackles of my daughter, it is my habit of breaking into song at the mention of a few trigger words.  My father did this to me, so I know how it feels.  That doesn’t stop me.  It’s a hard habit to break. The latest trigger word was cherry.   Making the most of what may be a short supply cherry season,  I surprised myself (and probably the fruit shop owner) by buying a whole box of cherries.  That’s when I started singing (not in the shop, you understand) the Cherry Ripe song from a version of Alice in Wonderland.  Alice is taken to another world in the story and without too much exaggeration so will you when you indulge in these.

I imagine you’re already in food overload (I know I am) but try not to resist this gooey, rich brownie studded with a sweet and juicy cherry.

I can’t envisage you'd want to leave the cherries out, but just in case you do, this brownie will still taste good.

Be warned though, this is the fabulous fudgy kind of brownie, not the “cakey” type (which I so loathe) so you don’t want to leave it lying around when it’s warm.  I keep mine in the fridge (being summer here).  It really is the kind of brownie you'll want to make again and again, with or without cherries. 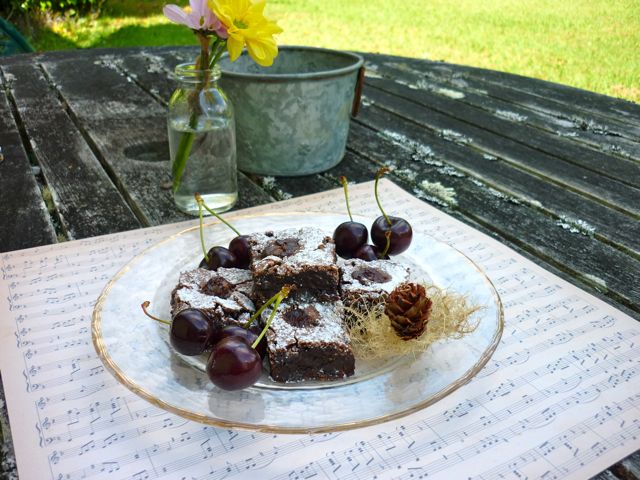 *A wee note on the cherries – I haven’t given quantities as it will depend on what size you cut the brownies.  I cut mine into small squares and squidged a cherry in each portion.  Use a cherry pitter to remove the pip, otherwise cut around half of each cherry with a small, sharp knife, twist gently to detach one half and remove the pip from the other half.  You now have 2 halves of a cherry to make a whole (who said I wasn’t good at Maths?).

Place the melted butter, sifted cocoa powder, sugar, salt, eggs and vanilla in a cake mixing bowl and whisk on a low to medium speed until light in colour - about 5 minutes.

Sift in the plain flour and add the chopped pieces of chocolate and gently fold to combine.

Bake for 50-55 minutes.  The brownie should be coming away from the sides of the tin but will still be soft in the middle.

Leave to cool completely in the tin.  When cold, cut into portions.  If you find it too sticky to cut, use a jug of hot water to dip your knife into after each slice (like they do with ice cream scoops).  Dry the knife before cutting again.  It will cut cleaner without all the goo attached.

Dust with icing sugar to finish.

Like this?  Try my Plum and Chocolate Slice based on a cherry and chocolate slice recipe.

I'm submitting this to Sweet New Zealand, hosted in December by Lydia from Lydia Bakes.