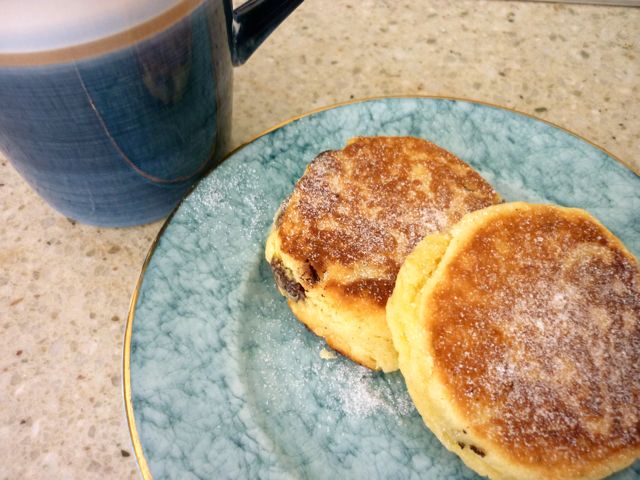 Welsh cakes have been described as a cross between a fruit scone, a pancake and a biscuit (someone said shortbread) – and rightly so - but they have a unique taste of their own.  I can't think of anything that quite compares to them.

Some time ago a colleague baked them one day for morning tea. Her perfectly crimped little rounds were a taste from her homeland of Wales.  I liked their simplicity, their scone-like texture, the burst of juiciness when I bit into a sultana and the sweet sugar on top.

Well I won the Welsh test, which is not to say I am now a one-woman rugby team, but that I apparently turned out a pretty good result at my first attempt at baking them last weekend.  I took some to work on Monday and handed the Welsh one hers.  She scoffed it down with obvious delight and declared it "lovely".  She's either very diplomatic or they were very good.  Either way, I don't care.  I Iiked them so that's all that needs to be said.

These are so very simple to make so one day, when you want a change from scones or muffins, try them.  Enjoy them still warm and unadorned (except for the sprinkly sugar topping)  or with butter and jam.  My preference though is to eat them one or two days old when they are firmer and seem to have more taste.

Rub the fat into the sieved flour until it resembles breadcrumbs. Add the sugar, sultanas and then the egg. Mix to combine, then form a ball of dough, using a splash of milk if needed.

Roll out the pastry until it is a 5mm/1⁄4in thick and cut into rounds with a 6cm/2-2 1/2in fluted cutter. (Fluted is traditional, you can use a plain round cutter if you wish.)

If you have an old-fashioned griddle, this is ideal (I don’t, although we used to have one back home in Scotland).   Otherwise, use a heavy bottom frypan and start heating it up.  I used my Le Creuset frypan and will be using it until I’m old and frail when I won’t be able to lift it.  Smear a little dab of butter on a paper towel and rub it over the base of the frypan.  Place the Welsh cakes on the frypan and cook for 2-3 minutes each side until brown.  You may have to cook them in batches so repeat smearing the pan with butter as necessary.

Remove from the frypan and put the cakes inside a tea towel on a plate to keep warm. 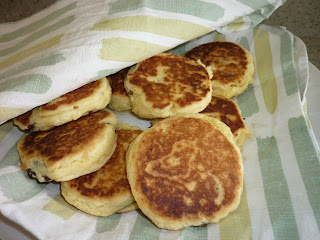 While the cakes are still warm, dust the tops with caster sugar.  Eat and enjoy. 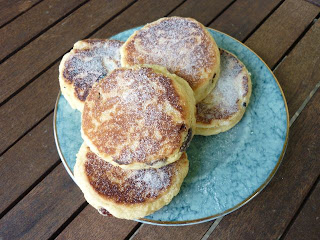