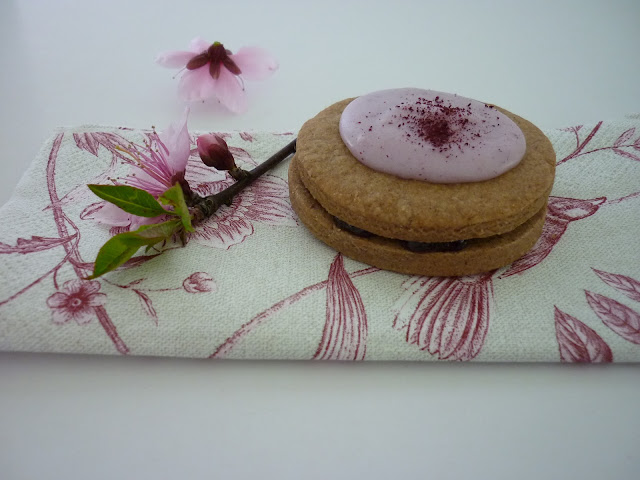 I may have said this before but I have had less success with biscuits than any other form of baking.  Since I started this blog though I’ve been feeling happier with my biscuit baking results, particularly the Passionfruit and Monte Carlo cream biscuits from earlier posts.  Time then for another biscuit recipe.

I often see Belgian biscuits in cafes, but I suspect the uniformity in their shape, size and colour indicates they are bought in from a supplier. They always look so attractive though and I wanted to make them at home.

I like the spiciness of these biscuits and (I almost feel ashamed to say this) I adore the shades of pink in the icing.  It’s just such a happy colour for me (please don’t judge me), so I definitely wanted to pretty mine up and get a nice shade going.  When you get them this good-looking, they don’t even need a card that says Eat Me.

When I picked a branch of blossom from the garden to use in the photo I didn’t imagine the tones of pink would match so well with the biscuit’s topping, but they did.  Same with the serviette - I popped it under the biscuit and wow, I love those colours.

The “berry” in the title arose from the fact that after I’d baked the biscuits, I discovered I had NO jam.  Raiding the fridge resulted in zero jam.  Raiding the pantry unearthed old plum jam fit only for the bucket.  The thought of dropping in on the neighbours did cross my mind but I couldn’t bear their pitying looks at seeing the city girl gone country, bereft of a single pot of jam whilst their shelves bulged with homemade jams, preserve and more besides.  On the pretext of buying a newspaper, I drove to the local (and tiny) garage.  Garage owner, Phil, obviously does not make his own jams either as he had ONE jar of Craig’s Three Berry jam looking rather forlorn on the shelf.  But, hey, it was all that I needed, thanks.

I used a little blackcurrant freeze-dried powder from Fresh As to give the icing a zingy little flavour and to make a more vibrant shade.   The Three Berry jam matched beautifully.  A sprinkle of the blackcurrant powder on top of the biscuits and it all came together.  (If you don’t have access to fruity, freeze-dried powders, I have given the more standard icings and toppings below.)

It all turned out rather better than I’d hoped for.  I love those kinds of moments. 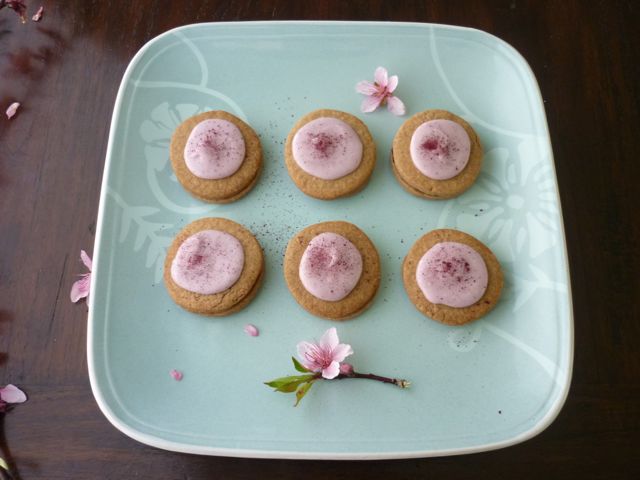 The biscuits are my entry this month to Sweet New Zealand - started by Alessandra Zecchini and also hosted by her this month.

Cream the butter and sugar until light and fluffy.  Add the egg and beat well.

Sift the flour, baking powder, cinnamon, ginger, mixed spice and cocoa powder together.  Incorporate the dry ingredients into the creamed butter mix until it comes together as a dough.

On a lightly floured board, roll the dough out to about 3mm thick then use a cookie cutter (mine was 6cm) to cut out rounds. Place on a greased oven tray and bake at 180°C for 15 minutes.

When the biscuits are cold, sandwich them with the jam, then ice and top them as below.

Sift the icing sugar and blackcurrant powder into a small bowl. Add the milk and melted butter and stir until the icing is well combined and of spreadable consistency. Add a little more milk if it is too stiff. Spread over the biscuits.

Sprinkle the top of the biscuits with the blackcurrant powder or coloured sugar**.

Follow these instructions if you don’t have freeze-dried powder

* Dip a cocktail stick or small skewer into red food colouring and add to the icing sugar, milk and butter mix until you have the shade you want.

**Coloured sugar – put ¼ cup sugar in a small plastic bag and add 1 or 2 drops of red food colouring.  Rub the bag between your hands until well combined.

The biscuit base recipe comes from the Edmonds Cookbook.
Posted by Lesley at 11:43 AM