Sometimes you don’t do things because you think they are going to be difficult.  Let me rephrase that.  Sometimes I don’t do things because I think they are going to be difficult.  Pizza dough once fell into that category.  That is until a work colleague casually claimed she made it from scratch.  I gazed in wonder.  How could that be, I thought, when I really should have been saying how easy is that?  Now, we often have pizza evenings where we break the rule of eating dinner a la table with slabs of pizza on wooden boards in front of the TV.  It’s usually a weekend affair when I can afford the time of letting the dough rise.
Anyway, I digress.  I am talking about Chelsea buns (sorry to surprise you, moving so rapidly from savoury to sweet).   Truth is I had all but forgotten about Chelsea buns until I saw a few recipes for them last year.  Then I waited for THE moment when I could tackle them.  That moment came one weekend not so long ago but long enough in blog time.  I could digress even more to explain why I have totally lost one week where I did not post a blog.  But I won’t.  I’ve wasted enough time already.  So here it is.
chelsea buns
1 egg
1 cup lukewarm water
3 ½ tsps active dry yeast
1 cup high grade flour
1 tsp sugar
2½ cups high grade flour
¼ cup sugar
1 tsp salt
50g butter, softened
70g butter, melted
2 tsp mixed spice
½ cup sultanas
¼ cup dried cranberries (You don’t have to use these.  I just seem to be having lots of cranberry moments.)
Sugar syrup
¼ cup sugar
¼ cup water
Make this while the buns are cooking in the oven by stirring together over a low heat until the sugar is dissolved. If you want to vary the amount, it's equal amounts of sugar and water.

In a small bowl, beat the first five ingredients until smooth.  Put somewhere warm for 10-15 minutes until the mixture is frothy.  On colder days, I put mine in the hot water cupboard.
Sift flour (that will be 2½ cups), with the ¼ cup of sugar and the salt into the mixing bowl of a cake mixer with a dough hook.  Make a well in the centre and pour in the frothy mix, bringing it all together into a dough.  Add the softened butter at the end.
Attach the dough hook and knead the dough for about five minutes until it is elastic and shiny.  If you are doing this by hand, put dough on a floured surface and knead for about 10 minutes until smooth.
Place dough in a lightly oiled large bowl, cover with cling wrap or a tea towel and leave in a warm place (back to the hot water cupboard!) for 40 minutes.
Turn the dough onto a lightly floured surface.  I used a Teflon mat as I find it is easier to manoeuvre the dough and, as I discovered, it has other uses later.  Press gently with your hands, and then roll out to a rectangle about 30cm wide and 36cm long.
Mix the melted butter and the 2 tsp mixed spice together.  Using a pastry brush, spread across the entire surface of the dough.  Mix the sultanas and cranberries together and scatter evenly over the dough.  With the Teflon mat, roll up the long edge as tightly as possible. If you’ve been paying attention at the sushi bar, you’ll know how to do this.  Otherwise, you’ll be like me and flounder a bit but the mat certainly makes it easier to roll up.  I’m sorry I did not take a photo of this step – it was an intense moment.
Cut into 3cm thick pieces.  You should get about 12-15 buns.  I don't like them too large.  If you need to, reshape them gently to little round shapes or scrolls.  Place in a greased and lined cake tin or baking dish.  I used two 20cm square cake tins. This is the better looking of the two. I think they look quite cosy in their little tin, don’t you? Put the scrolls in the oven and bake for 15-20 minutes, or until golden and dough is well cooked.  Keep a close eye on them.  I just turned my back for a few minutes when they were quite pale and when I looked again I thought they had had an instant spray tan they were that brown. 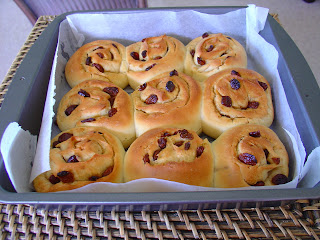 Remove from oven and brush with sugar syrup immediately.  Leave to cool in the tin for 5 minutes then turn out onto a cake rack.

Sift icing sugar into a small bowl and add enough milk to make icing into a drizzling consistency.
When buns are cool (if you can wait for them to cool, that is), drizzle with the icing. This is the time to let your inner Jackson Pollock run wild. 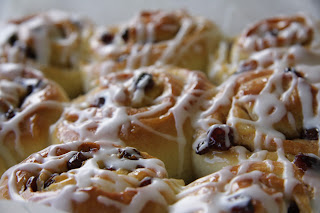 This is easy.  I was surprised how well they turned out.  Don’t forget to factor in that you have to let the dough rise on two occasions so start early.
I couldn’t imagine having Chelsea buns without the icing – that is my memory of them – but many recipes do show them naked - well, just modestly covered with the sugar syrup.  If you’re like me, the sticky white icing, the cranberries and the sultanas will be the best bits.  In fact, I can think of no reason why you can’t add more…
Posted by Lesley at 9:07 PM