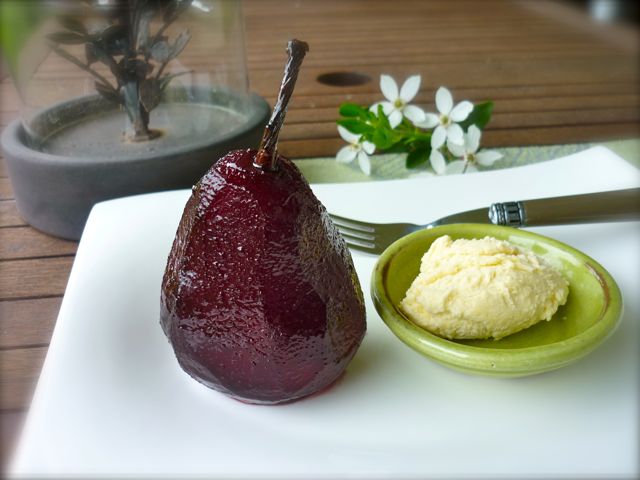 Say July to me and I’ll tell you it’s summer.  Even after twenty years of being in the southern hemisphere I still can’t get my seasons right.  I’m eating and cooking with pears and my mind’s tuning in to autumn, hence the pears. Here. Now. When it’s not autumn.  But somewhere in the world it is autumn (or fall), so this is for you, my friend.

The starting point was clotted cream.  If you are familiar with clotted cream in England you may be disappointed to find “Devonshire teas” in New Zealand are not served with traditional clotted cream but with ordinary whipped cream.  I was, but then I got over it.

Some time ago, a work colleague, who hails from Devon, gave me a slow cooker recipe for clotted cream.  She was excited as she’d sent it in to NZ chef Peter Gordon in response to his request in his newspaper column for clotted cream suppliers and her reply was published.  It is so very easy you must try it.

Instead of marrying it up with scones, I matched it with some poached pears for a simple pudding (I love the word “pudding”).  The inspiration came from some poached pears I’d eaten at Dida’s Food Store in Auckland during a dinner and talk with Dianne Jacob (more on that in my next Etcetera post).

Traditionally clotted cream uses unpasteurized milk but, hey ho, even though I live in the country the only milk making it to my house is the supermarket standard (full cream) milk.  (Visions of me on a milking stool milking a cow? Not likely!) 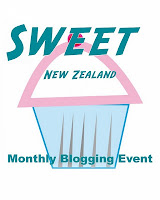 This pudding is my entry for Sweet New Zealand, hosted for November by pet lover, Lucy at The Kitchen Maid.

Start the recipe two days before required as it has to cook for 10 hours, cool and then chill  for 10 hours.

Follow the instructions for the use of your own slow cooker.

Try and match the dish you use for the cream and milk to the shape of your slow cooker for maximum area coverage.  The more surface area you have the more cream you will get as the cream forms on the surface of the dish.  So if you have an oval shaped slow cooker, use an oval shaped dish.  I used a Pyrex glass dish (without the lid) inside the slow cooker.

After skimming off the top, cover the leftover milk with the lid and store in the fridge.  Use it to make scones or a rice pudding.

Store the cream in the fridge but leave at room temperature prior to serving to soften.

The cream is best eaten on the day or next day. 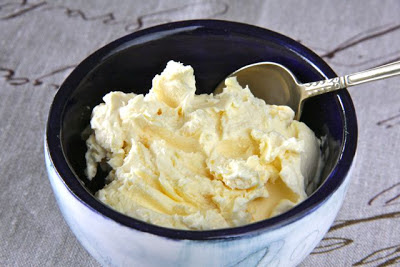 Makes a small bowlful (see photo above) - approximately ¾ cup.
Double the recipe if required and if you have the room in your slow cooker.

Turn the slow cooker on to “low” setting.

Invert a saucer on the bottom of the slow cooker.  Place a Pyrex dish, or similar, on top of the saucer to fit your slow cooker.

Mix the milk and cream in a large jug and pour gently into the bowl in the slow cooker.

Carefully pour water into the slow cooker so that it comes up to approximately 4cms from the top of the container holding the milk and cream.   Replace lid on slow cooker (not container) and leave for approximately 10 hours or overnight.  A lovely golden crust should have formed.

Leave to cool, then place in fridge for approx 10 hours. Take crust and cream off the top (it pretty much comes off in one piece) and there you have it, yummy clotted cream.  Stir gently and serve.

Save the leftover milk in the fridge for another recipe.

Peel the pears, leaving the stalk on and keeping the pears whole.  Place in a heavy saucepan, add the wine and sugar, stir and bring to the boil.  Reduce heat and simmer for about 1 hour, or until the pears are tender (test them with a skewer trying not to mark them too much).

When the pears are ready remove with a slotted spoon and keep warm.

Reduce the liquid over a high heat until it has the consistency of syrup.

Place the pears on the plates and spoon over the syrup.