Baking - There was a whole lotta baking going on at the weekend.  Saturday’s predicted “weather bomb” showed up as gusts of wind and showers so baking in a warm kitchen seemed the right thing to do.
I’d started a barm brack loaf the night before – just because my partner loves it. Instead of soaking the dried fruit and sugar in Earl Grey tea, I used the fragrant Kiwi Christmas Tea from NZ Live loose tea (yep, Christmas came and went without it being opened).   The smell alone was enough to convince me it would spice up the tea loaf in a good way.  And it did.  A blend of Assam tea, chocolate, orange, clove, star anise and cinnamon, with manuka leaf and pink peppercorns (wow, that’s a lot of star attractions), gave the loaf a gorgeous spicy flavour and turned it a warm reddish colour.  It may permanently replace the Earl Grey.
Next up were some Monte Carlo biscuits (more of in another post).  And following on from my stint in the kitchen, my daughter made a caramelised apple pie.  It's all going down rather well!
Appearing everywhere - Often when I‘m considering blogging about a recipe or ingredient I suddenly see that same thing occur everywhere – it’s a really strange phenomenon.  Reading The Kindness Of Your Nature by Linda Olsson (a book which I highly recommend), the main character was asked to name things she liked and one of her preferences were blood oranges.  I love the appearance of a blood orange and the name.  It conjures up something both rare and exotic, which is odd because you’d think the word “blood” would put you off.  Next thing, I was browsing the web and blood oranges were everywhere.  OK I exaggerate they were here and here and here (with mango oranges which I have never heard of).  But really, is it just coincidence that they kept cropping up, seasonal activity or something else (cue strange paranormal activity music)?
Ballet – At the opening night of NYC staged by the Royal New Zealand Ballet, I noticed there were lots of young women in the crowd.  For those who watch the behind the scenes TV programme, The Secret Lives of Dancers, Sergio has arrived and is hot!  Gasps of delight accompanied his “stripped to the waist” stroll across the stage in the second act.  This man has one hell of a body. As one tweet summed it up, “the walk alone was worth the admission price”.  Apart from the smouldering Sergio, the ballet was the best I’ve seen from the RNZ Ballet – youthful, energetic, and sexy, with some outstanding solo performances. 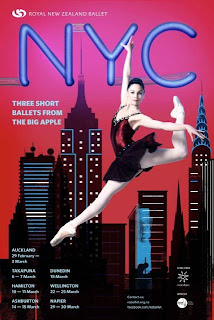 Updating - I’ve been removing links to blogs that haven’t posted in a while.  So if you’re missing, it’s not that I don’t love you anymore, it’s just that you’re not around.  Let me know when you’re back.
Posted by Lesley at 5:12 PM