Cranachan – and a Happy New Year 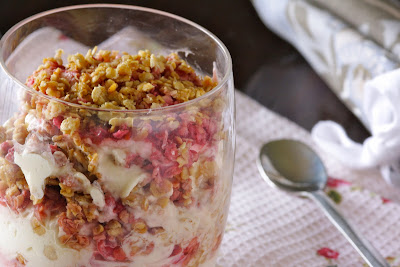 As a nod to my Scottish heritage and because it is Hogmanay (Scottish for New Year’s Eve) I’m giving you Cranachan as my last dish for 2011.  Whilst it’s known as a traditional Scottish dessert, it is not something our family ever ate.  I suppose the addition of alcohol prevented it from being served as family pudding, although that didn’t stop the huge glug of sherry soaking up the sponge in grannie’s trifle.  I have noticed the recipe more as an adult – perhaps it has just increased in popularity?
As I don’t like whisky (shameful for a Scot to admit, I must say!), I have given the recipe a bit of a twist and used Limoncello.  The one pictured was made with frozen raspberries but I have also made it with fresh raspberries.  If you were feeling in the mood to indulge or celebrate New Year, you could also eat it as a celebratory special breakfast. Yes, well…..
2011 has been the first year of my food blog (anniversary coming up in January) and I can honestly say it has been the best thing for me, giving me a creative outlet I never knew I needed.  I have encountered so many like-minded people through their inspiring, innovative and sometimes humbling blogs and websites and at the first New Zealand Food Bloggers' Conference.  To all of you, bloggers and followers, I thank you.  You have each truly given me something to take forward into 2012.
I am including this post in Sweet New Zealand created originally by Alessandra here and hosted this month by Bron Marshall here.  Go there now for the kind of creativity I am talking about.
Happy Hogmanay and every best wish for 2012.
Lesley

Cranachan
Makes about 4 serves
This is the recipe I used after looking at many variations so feel free to adapt.
60g of medium oatmeal
2 tbsp brown sugar
150g of raspberries (if using frozen raspberries, add enough sugar to sweeten)
250mls cream
2 tablespoons of malt whisky (I used Limoncello instead of whisky)
2 tablespoons of runny honey

Heat a heavy based fry pan until hot. Add the oats and brown sugar stirring constantly until the oats have a light, nutty smell and are beginning to change colour. Keep an eye on the pan as the oats can burn quickly. Remove from pan and leave to cool.
If you’re using frozen raspberries, heat them gently with enough sugar to sweeten to your taste (I used vanilla sugar) in a saucepan or in the microwave. Leave to cool. For fresh or frozen raspberries: Keep half the raspberries aside. With the other half, either blitz them briefly in a blender or mash them with a potato masher, not too finely.
In a bowl whisk the cream to form firm peaks. Stir in 1 tbsp whisky (or, in my case, Limoncello) and 1 tbsp honey.
Gently layer the components in individual serving glasses starting with the cream, followed by raspberries, then the crunchy oatmeal. Repeat with remainder and finish with a layer of thick cream and a sprinkling of oatmeal.
Cover with plastic wrap and chill in the fridge for an hour or two.
To serve, drizzle over a little extra honey and whisky or Limoncello, if desired. Serve with little shortbread biscuits.
Variations to try:
Posted by Lesley at 5:07 PM