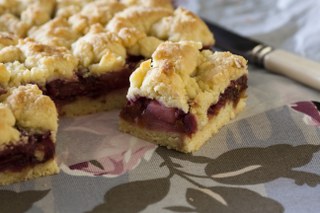 I dislike wasting food and I had seven dark-red, tart and flavourful tamarillos ripening by the day.  If there had been muesli, I would have halved them, sprinkled them with brown sugar and put them under the grill.  But lately there has been little time to make muesli and I have been content with my brown-sugar-sweetened porridge.
I wanted to make something sweet with them – not chutney – a pie of some sort.  I was hoping to replicate a sweet, tamarillo pie I had eaten at a café on the way to the Coromandel some years ago but couldn’t quite remember what form it took.  I had a vague idea about using coconut.
Just as the tamarillos were facing a future in the food waste bin, the rural women of New Zealand came to my rescue.  Well, one of them - in the form of a cookbook, A Good Spread – Recipes from the kitchens of Rural Women New Zealand.  Sometimes the sparseness of information in recipes from these types of books leaves me high and dry, but not this one.
I liked the idea of using dates and rum, along with the tamarillos and apples. Their flavours sweeten and mellow the tartness of the fruit.
Initially I was going to omit the rum (recipe didn’t state whether to use light or dark). Instead, I substituted it with Malibu – it seemed a natural choice to marry with the coconut I have added to the recipe.
I misread the recipe and added the honey and rum before bringing the mixture to a thick, pulpy texture, which is why my filling ended up runny.  I used a slotted spoon to remove the fruit without too much of the liquid.
I also forgot to take a photo of the tamarillos in their natural state.  Now that is a shame as they are so photogenic with their egg-shaped, smooth dark red skin and long dangly stems.  There will be other times for photographs though, as I will definitely make this recipe again.  It is good as a dessert or cut into squares for morning or afternoon tea.
tamarillo, apple & coconut shortcake
2 green (or cooking) apples
6 -7 tamarillos
zest of 1 lemon
juice of about ½ lemon (or use juice & zest of 1 lime)
½ cup chopped dates
¼ cup sugar
2 dessertspoons honey
2 dessertspoons Malibu (coconut-flavoured white rum)
1 teaspoon thread coconut (or use desiccated coconut)
Shortcake
125g butter
125g sugar
1 egg
225g flour
1½ tsp baking powder
1 heaped dessertspoon custard powder
Peel and thinly slice apples.  Place in a saucepan with just enough water to cover the bottom and stew until apples are beginning to soften.  Add peeled and sliced tamarillos, lemon zest and juice, chopped dates and sugar.  Cook, stirring frequently, until the mixture is soft, pulpy and thickened.  Remove from heat and add honey and Malibu.  Cool.
To make shortcake, cream butter and sugar, add egg and beat again.  Mix in sifted flour, baking powder and custard powder until combined and the dough forms a ball.  Add a little extra flour if it is too sticky.
Press half the dough into a deep, greased and lined 23cm baking or pie dish.  I used a 21cm square tin.
Spread the filling on the base (if you think the filling is too liquid, use a slotted spoon to remove fruit mix without liquid).  Sprinkle the coconut over the top.
With your fingers, pluck smallish pieces from the remaining half dough and dot all over the top.  Alternatively, you can roll the second half of dough into a log or ball, chill or freeze until firm and grate over the top.  I went for blobs of shortcake, as I just wanted it in the oven. 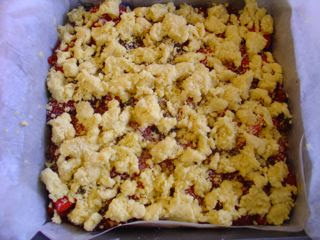 Bake at 180°C for 20-30 minutes or until topping is golden and cooked through.  Serve warm or cold, sprinkled with icing sugar and whipped cream.
Adapted from a recipe by Cynthia Harfoot, Cambridge, published in A Good Spread – Recipes from the kitchens of Rural Women New Zealand.
Posted by Lesley at 1:40 PM