a bite to savour

I've waited a long time to do this, having been inspired by so many other food blogs.  I'll just call it procrastination, which I seem to be good at.

So, my "bite to savour" is starting this blog and tasting my first homemade plum jam of the year heaped onto a "fresh out the oven" yoghurt & coconut loaf.

An excess of plums from the tree in the garden sometimes makes me feel I am creating more work for myself - must make jam, chutney, cakes, tarts - must use up as many plums as I can.  For the last few years I have managed to make a small amount of jam and the odd cake or dessert.  The rest of the plums get given away or are left for the birds.  Each year, out comes the 10-minute plum jam recipe, which entails about the right amount of exertion.  I replaced some of the sugar with vanilla sugar (caster sugar which had been flavoured by a vanilla pod sitting in the jar for a few months) and decided on the spur of the moment to add a large splash of a 2004 late-harvest semillon dessert wine, which I happened to be drinking at the time, just not that fast.  I like to add different flavours to jams to make them a bit more out of the ordinary.

The loaf comes from Bake by Allyson Gofton which fast became one of my favourite baking cookbooks because of the reliability of the recipes.  The recipe called for 2 tbsp dark rum.  Not being a rum-and-coke girl, I substituted this with Malibu - a white rum and coconut liqueur - which I thought would enhance the coconut in the loaf, and it does. 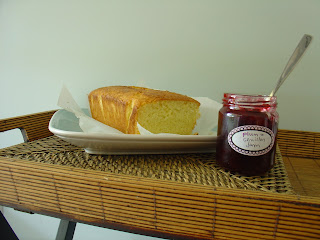 I didn't intend decorating the loaf with plum jam.  There was a passionfruit icing to be made but with coffee to be drunk there was no waiting for icing and I remembered the jam had to be tasted.  A small taste of jam turned into quite large blobs of dark plum over the yoghurt & coconut loaf.  It tasted so good that I was picking up pieces of plum and devouring them on their own.  It looked so good too with the contrast of the plum colour and the golden yellow of the loaf.
Posted by Lesley at 2:32 PM